ARCS Foundation Atlanta Chapter wrapped up its year by holding its annual meeting and luncheon on May 11 at the Piedmont Driving Club. Following Board Member reports and the introduction of the Board of Directors Slate for 2016-2017, Chapter President Jane Dolinger concluded the business portion of the meeting by turning the gavel over to incoming President Sara Jean Burke. Atlanta Chapter members and guests enjoyed chatting over a lovely lunch until the highlight of the gathering: a panel discussion with four current ARCS Scholars.

Anastasia Bobilev was happy to announce that she had completed her PhD at the University of Georgia 48 hours prior to the luncheon and was preparing to move to Texas for a post doc position. The focus of her graduate research was a genetic neurodevelopmental disorder called aniridia, which is caused by mutations in the PAX6 gene. Aniridia is a congenital disorder that is diagnosed by a lack of iris. People with aniridia have underdevelopment of brain structures such as the major connections between the left and right side of the brain, though how these changes translate to cognitive function are not well understood. Anastasia has examined changes in molecular genetics and auditory processing measured with neuroimaging, as well as differences in brain structure with neuroimaging in the mouse model of this disorder. Collectively, this integrative approach has shed light on how molecular mutations translate to global changes in brain structure and function that can inform clinical therapies.

Kerri Lynn Coon, also from the University of Georgia, described her research involving mosquitoes, important insects because several species vector disease-causing organisms to humans and other animals. One approach to prevent the spread of these diseases (including Zika) is to control mosquito populations, either by disrupting mosquito development or altering reproduction in the field. Kerri's work identifies the gut bacteria associated with mosquitoes as a potential target for mosquito (and disease) control.

Jason Frieman, from Georgia Tech, eased the audience into the subject of rocket science by first talking about the popular movie “The Martian,” which is the harrowing tale of one of the first manned missions to Mars. In order to actually achieve these bold next steps in space, we will need to develop the next generation of super-efficient electric rockets. Jason's research focuses on understanding how to properly design the facilities needed to perform ground testing of these rockets and quantifying how different aspects of these ground test facilities might change the rocket performance as compared to what would happen in space.

Finally, Jessica Petree, from Emory University, described her work on two projects. The first project entails building a nanomachine that is able to edit and correct damaged messenger RNA. The second project involves designing an asthma drug that knocks down levels of inflammatory molecules in the lung that lead to bronchial constriction.

Each of the presentations reinforced the commitment of audience members to the mission of ARCS Foundation and reminded them of potential outcomes of advancing science in America. 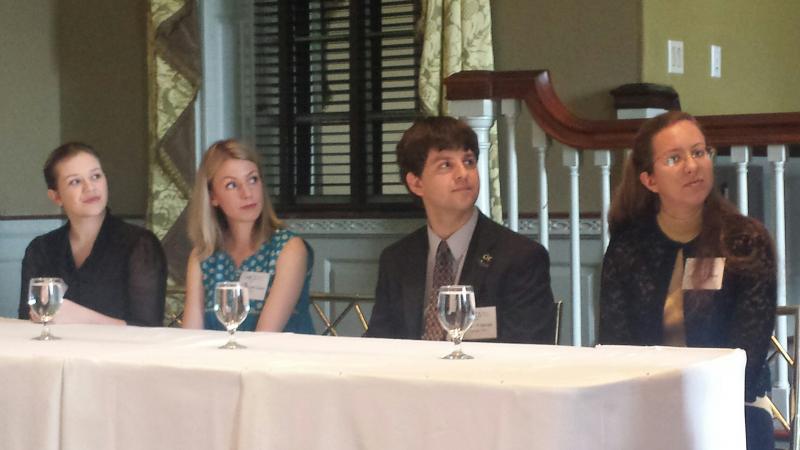