The 2017 General Membership Meeting and Luncheon was held on January 18th at the Capital City Club downtown. One of the event highlights was the announcement of this year's ARCS Light. Each year, the past ARCS Lights select a deserving member from nominations by the membership to receive the award.  This year, Gracia Conn received the award.  Gracia joined ARCS in 2002 and immediately assumed the post of Historian.  She has also been Newsletter editor, ARCS Scholar vice-chair, Scholar Luncheon co-chair, VP for Communications and Database chair. In 2012, a few months before becoming president, Gracia was named presidet-elect to replace Debbie Shelton who became ill and was unable to assume the job of president.  Contratulations to Gracia for a well deserved tribute.

The speaker for the luncheon was Jonathan Mermin, MD, MPH, and Director of the National Center for HIV/AIDS, Viral Hepatitis, STD, and TB Prevention.  He involved the audience by asking the steps we would take to control two disease outbreaks.  One was an outbreak of E. Coli O157 first reported in Illinois and Conneticut and the other was a Cholera epidemic halfway around the world.  In both cases, tracking the source and establishing containment and treatment procedures saved lives. 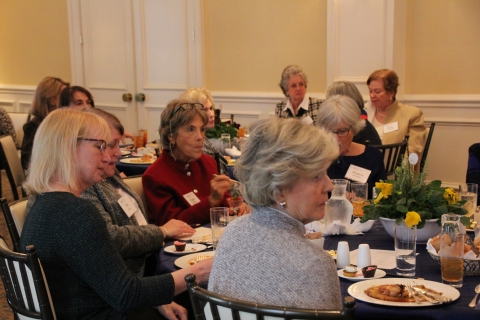