Congratulations to Leslie Petter, whom the Atlanta Nominating Committee recently tapped to serve as President-elect in 2019-20 and then as President in the following two years, succeeding Susan McGonigle.

“All of my ARCS jobs have been interesting, but I love serving on the Chapter Board.  It is a nice group of women, and the board meetings are a great way to connect, “ said Leslie.

Leslie and her husband Skip have hosted the Atlanta Chapter fall cocktail party several times.  They have one daughter, Lissa, who lives in Atlanta with her husband and two children.

Having lived in Japan from age 8 to until she was 15, Leslie speaks Japanese and French, as well as some Chinese.  Her father’s career in the oil business with J. Paul Getty took the family to Japan.  Leslie attended boarding school in Connecticut.  She completed her undergraduate studies in English at Stanford University and then received her law degree from DePaul University in Chicago.  Leslie and Skip met at Stanford; they moved to Atlanta in 1991 after both finished graduate school in Chicago. 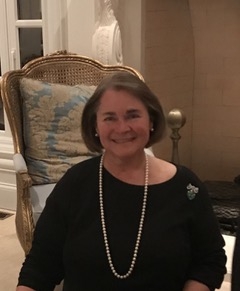