One of our six 2018 new members, sponsored by Suzy Wasserman and Beth Finnerty, is Vikki Millender-Morrow. Prominent in Atlanta’s business and cultural community for more than two decades, Vikki currently serves as the President & CEO for the National Black Arts Festival. The National Black Arts Festival (NBAF) is a nonprofit organization with a 30-year legacy of providing stellar artistic and educational programs in visual arts, music, dance, film and theater.

As shared earlier, in October 2018 Vikki had the honor of accepting on behalf of NBAF one of ten annual Governor’s Awards for the Arts and Humanities, presented in partnership with the Georgia Council for the Arts and Georgia Humanities. Vikki noted that it was “amazing recognition for many years of hard work” and was awarded to coincide with the organization’s 30th anniversary. To continue that momentum and capitalize on Atlanta hosting Super Bowl LIII, recent NBAF events have included a Wearable Art Party at the High Museum and a fine art exhibit at September Gray Gallery the day before the big game. The organization’s annual fashion event, Fine Art + Fashion, is scheduled for March 27, and funds raised will support NBAF’s arts programming for underserved youth in local schools.

After spending 20 years with AT&T in positions such as Director of Human Resources, Product Manager, Sales Leader and Systems Engineer, she has transitioned into a seasoned nonprofit leader with over a decade of effective operational, strategic, and executive leadership at nonprofits such as the Girl Scouts of Greater Atlanta, the Georgia Campaign for Adolescent Power & Potential (GCAPP), and Girls Incorporated of Greater Atlanta.

Vikki was drawn to joining ARCS Foundation after attending the Scholar Awards Luncheon with her neighbor Suzy Wasserman. She noted that she was blown away by the scholars and the work ARCS Foundation is doing to advance science in America. As an analytical thinker who loves learning, and with an undergraduate degree in electrical engineering from the University of Alabama at Birmingham, she wanted to join the Atlanta Chapter after learning more about our organization. And we’re fortunate to have this incredible new member!

More information on NBAF’s mission, events, and ways to give is found at nbaf.org. 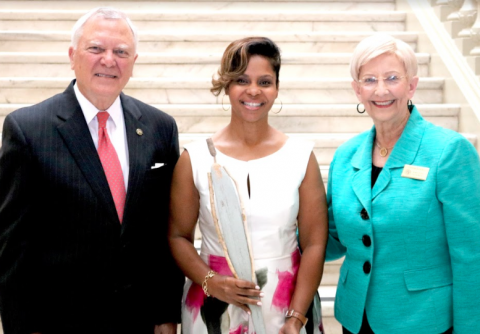