A self-described fan of in-depth academics, ARCS Scholar Daniel Moreno says he knew Georgia Tech was the place for him to pursue his graduate work when he saw the campus and the research labs.  Having grown up in New York and attended Cooper Union for his undergraduate degree in mechanical engineering, he was also attracted to the city of Atlanta.

“It feels like a southern New York.  It has that big city feeling that I enjoy,” Daniel explained.

In his third and final year as a Scholar with the Atlanta Chapter, Daniel is working on his PhD in mechanical engineering.  His studies and research are focused on designing systems for efficient energy production by mixing fresh water and sea water, and on researching efficient processes for using energy to purify salt water for drinking.   Daniel is hoping that his research may be used in the business sector and advanced by other scholars.  He ultimately hopes to teach in a mechanical engineering program at the collegiate level.

Daniel says that his ARCS Award has allowed him to travel to specialized energy conferences and workshops in his field, which also fueled his motivation to continue to advance his research.  He also has met other ARCS Scholars who have been great contacts for him.

“I will always be appreciative of the support that ARCS Foundation Atlanta provided to me,” says Daniel. 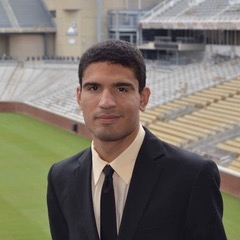